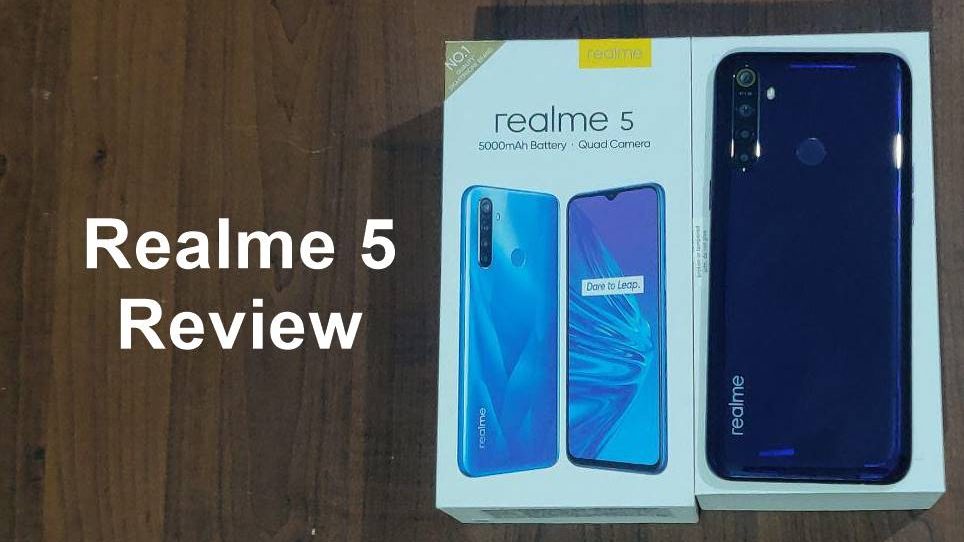 
Realme just launched its Realme 5 series of handsets. As promised by the company, the Realme 5 is priced under Rs 10,000. The handset comes with a quad-camera setup and is basically the first handset in India to feature four rear cameras in under 10,000 prices. In this article, we are sharing Realm 5 Review and Pro & Cons

Realme has updated its design language a bit with the Realme 5. The design of the diamond pattern on the back has been updated to a more crystalline pattern.

The size of this phone does make one-handed use quite cumbersome, and even with large hands, we struggled to tap anywhere near the top of the display. The Realme 5 is a bit heavy too, at nearly 200g. Button placement and tactile feedback of the volume and power buttons are good and at the bottom, we have the single speaker, headphone socket, and a Micro-USB charging port.

The Realme 5 trades screen size for resolution. Clocking in at 6.5-inches, the display is one of the largest in the 10,000Rs segment, though the HD+ resolution doesn’t do it any favors. Text rendering, in particular, quickly reveals blurry edges and a distinct lack of sharpness. The default color profile has an obvious blue tinge to it and is far from neutral.

The Realme 5 has a lot of things going for it, but its headlining feature is undoubtedly the presence of a quad-camera setup on the back. Specs-wise, the smartphone features a 12MP main shooter which has been paired with an 8MP wide-angle lens, a 2MP ultra macro lens, and a 2MP depth sensor. For selfies, the device comes equipped with a 13MP front-facing camera.

The Snapdragon 665 on the Realme 5 is an interesting beast. Built on an 11nm process. you can expect to see some gains in battery life. On the other hand, the peak clock speed has been dropped a bit, which means that performance, at least in CPU benchmarks, isn’t quite as good as the 660. The improved GPU should, however, give a boost in gaming applications. All this to say that the Snapdragon 665 isn’t quite a performance leap forward and you should keep your expectations tempered.

As for the battery, the handset is fuelled by a massive 5,000mAh cell which will easily last you two days off a single charge. In fact, the handset lasted a whopping 33 hours in our battery drain test, which is the longest any phone has played a single video on loop.

Love it or hate it, Color OS is what you get on Realme’s hardware. I find it odd that the company keeps flipping between different visual styles for notification shade toggles and iconography. The phone makes extensive use of white in its interface, a definite eyesore.