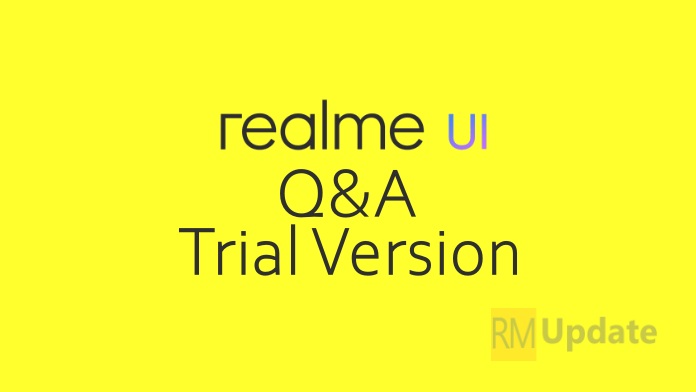 One Thread to Know More about Realme UI Trial Version

Q. How do I get the latest system update?

Q. What is Trial Version? How is it different from the Official Version?

Ans. Trial version is the fastest way to experience new updates. It is comparatively less stable than the official version.

Hence instead of rolling it out to all the users, we prefer to rolling it in batches, specific models and region wise. So that valuable feedback received in each trial version can be incorporated in subsequent Trial Versions by our R&D and a more improved & stable Trial Version can be rolled out to the next batch of users.

Q. How do I get Realme UI Trial Version on my phone?

Ans. Upon the announcement of the availability of Trial Version on the phone model, you can participate in the trial version through Realme Community. The Realme UI trial version will be available for Realme 3 and 3i in this month.

Q. Why can’t I apply for Trial Version on my phone yet?

Ans. Trial Version is not stable enough to be released in bulk to all users. Hence Realme development team releases it in multiple batches and selects regions/models in early-stage to release in which feedback mechanisms are strong. Based on received feedback from initial batches of Trial versions, Realme development team further improves the subsequent versions to make a more stable version which may take a considerable time. Please stay tuned with the details on Realme official pages.

Due to the restrictions of local operators and GDPR (in Europe), users in certain regions can’t get Trial Version and can only wait for the release of Official Version.

Q. Why is there a quota for Trial Version?

Ans. Given that Trial Version is still in the stage of development and improvement, Realme can only release it batch by batch with a limited quota to ensure system stability. They will release more batches with more quotas as soon as possible. Thanks for your understanding and patience.

Q. When can I get Trial Version?

Q. If I would like to downgrade to the previous system version, what should I do?

Ans. Please find the nearest Realme/OPPO official service Center. Their experts will help you with a system downgrade.

If you’ve any other question then post in the comment below that we’ll reply but the question answered above will not be attended.