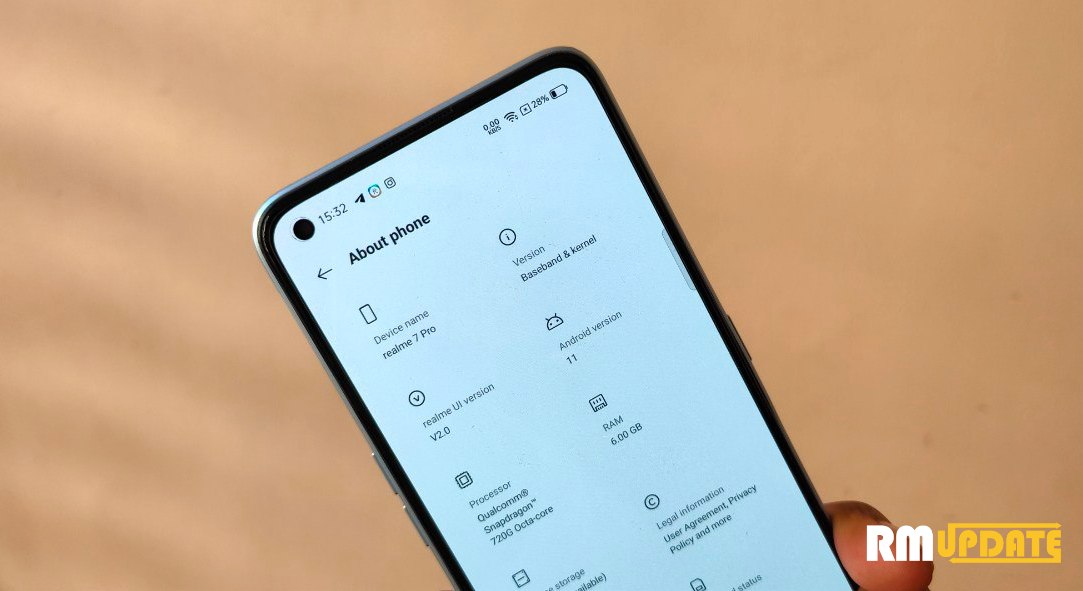 Realme has rolled out the official update for its flagship device, however, the company opens its early access program that brings the beta versions of Android 11-based Realme UI 2.0 for many of its old & new phones in India, Indonesia & China.

Before rolling up for the update, be very sure as these would be beta version updates and might cause problems on the devices. Realme has stated a warning that the software is not stable and could have an unpredictable impact on the devices.

In the Realme UI 2.0 skin, the company changed a lot of things, and today we’ll talk about new features or changes.

Compared to the earlier version, Realme UI 2.0 is more polished and refined. Realme has made a conscious effort to make it look transparent. Everything is a bit more tweaked for ease of use on taller screens. We quite like the look and feel of Realme UI 2.0 and believe that many Realme fans will be too. 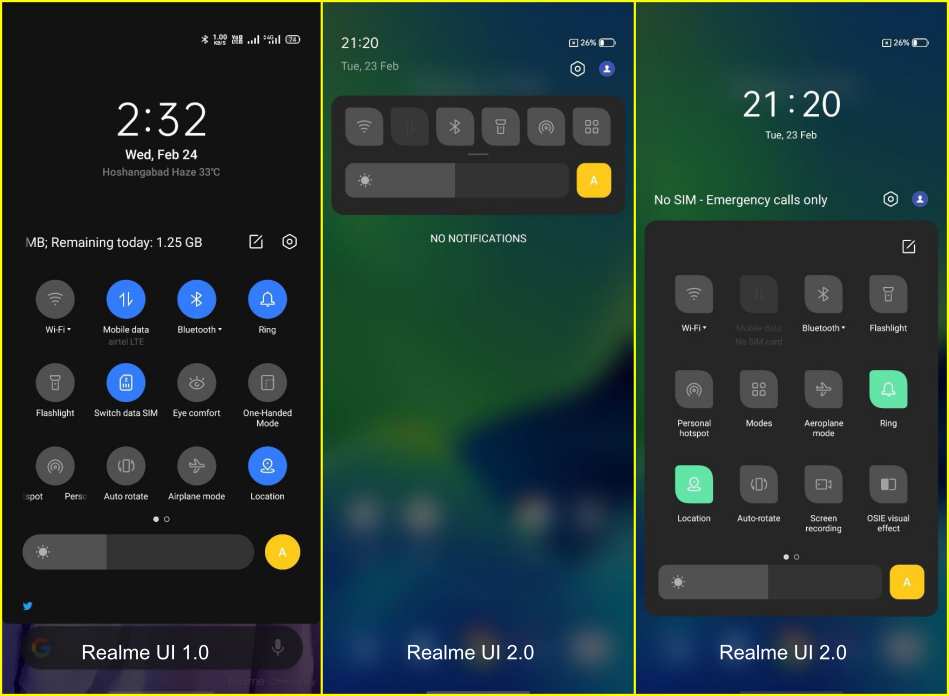 If you will install the Realme UI 2.0 so the first changes that you’ll notice after switching to Realme UI 2.0. The notification shade and quick settings now have a blurred, transparent background so it no longer hides the wallpaper and app icons completely. 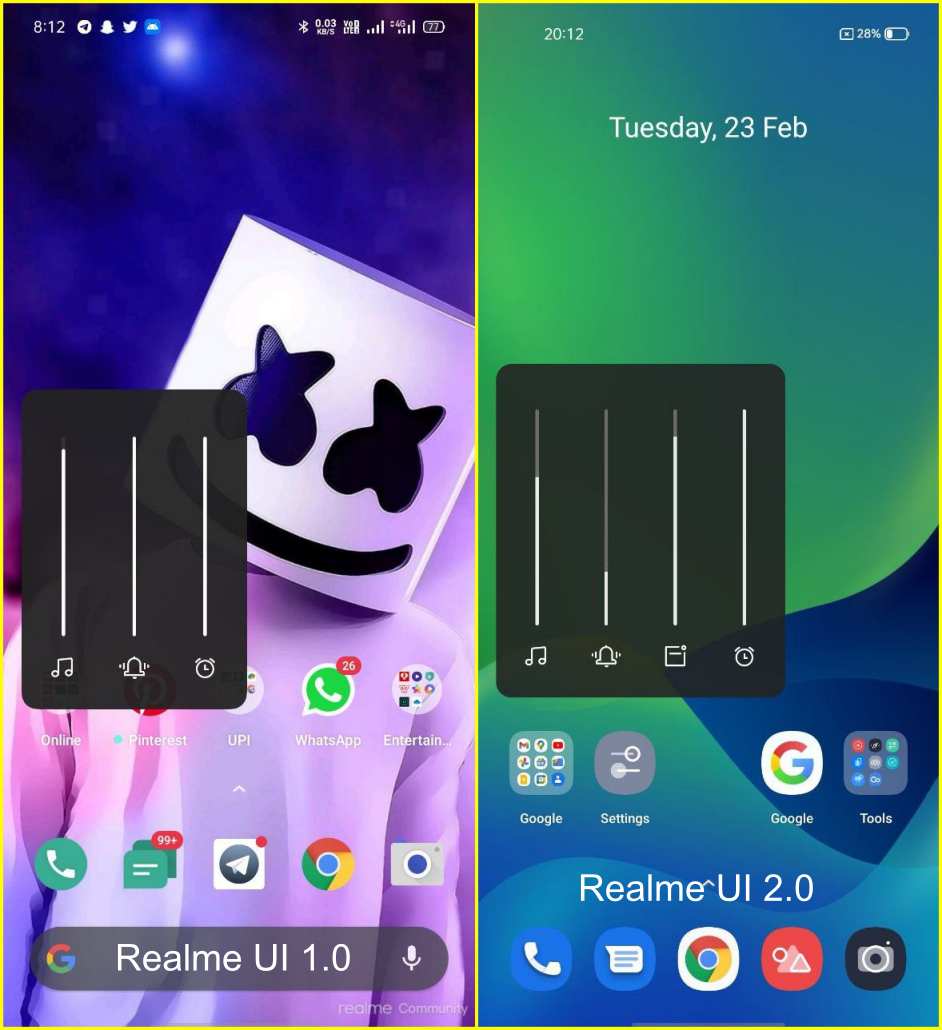 Realme changed only one thing. If you expand the volume control in Realme UI 2.0 so now you can manage notification volume from the volume menu. 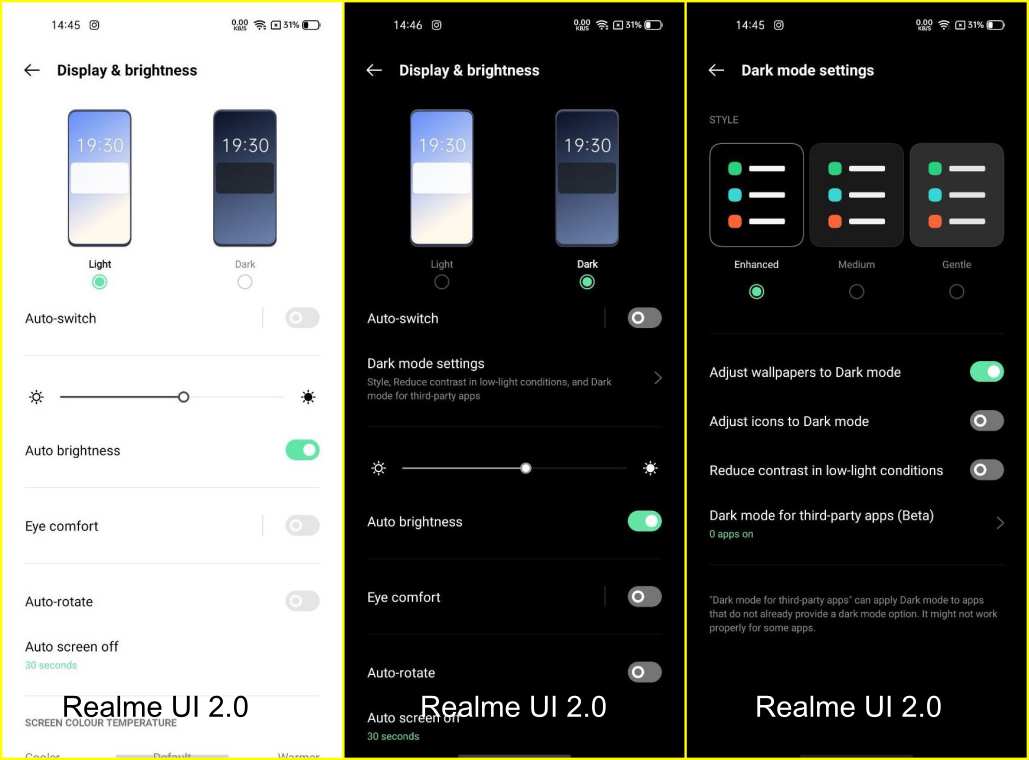 Realme UI 2.0’s New Dark Mode will provide 3 color schemes of pitch dark, blue dark, and gray dark, varying in darkness intensity. In addition, Dark Mode can be adjusted on the icons and wallpapers on the home page, which can match with the rising and setting of the sun. 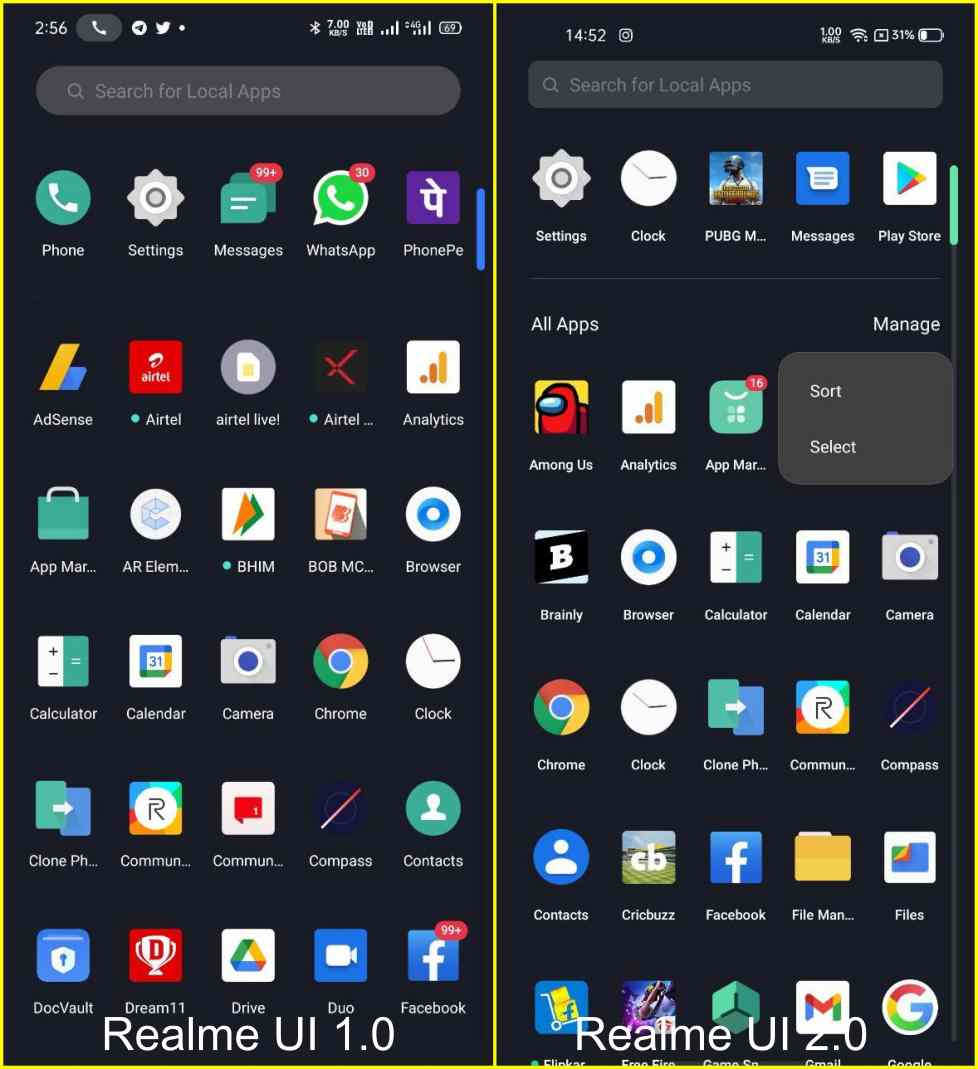 Realme UI version 1.0 brings a new app drawer with released, but what about in this new Realme UI 2.0 skin. Realme adds a new feature now you can short or select apps via the manage button. 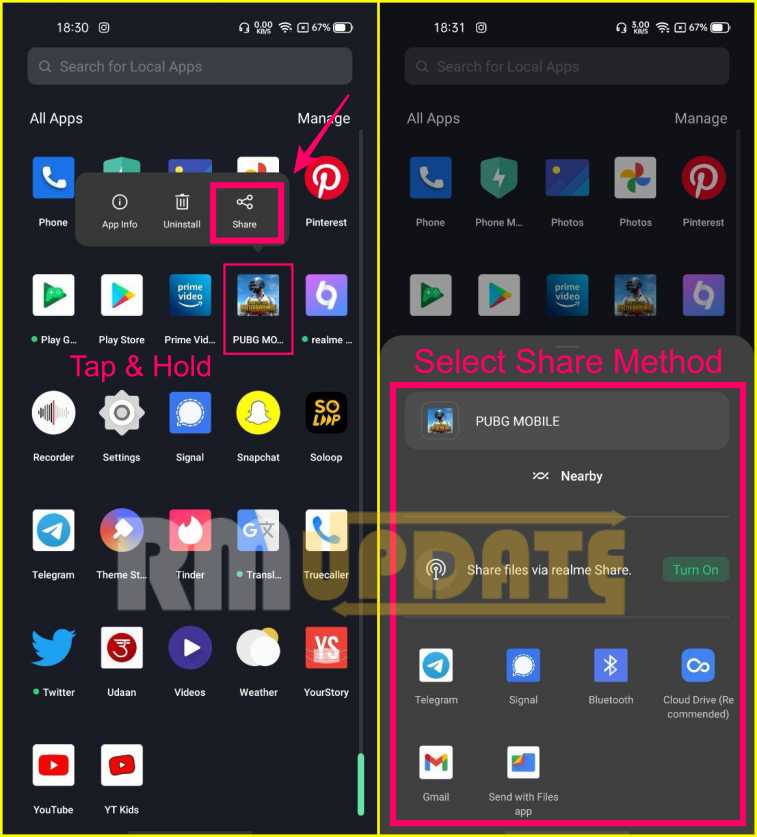 The latest Realme UI 2.0 skin brings one more new cool feature, now you can share any installed APK file from your device to other smartphones. You can share Applications via Realme share, Bluetooth, Google’s Nearby, and any third-party messenger app such as WhatsApp, Telegram, Signal, etc. 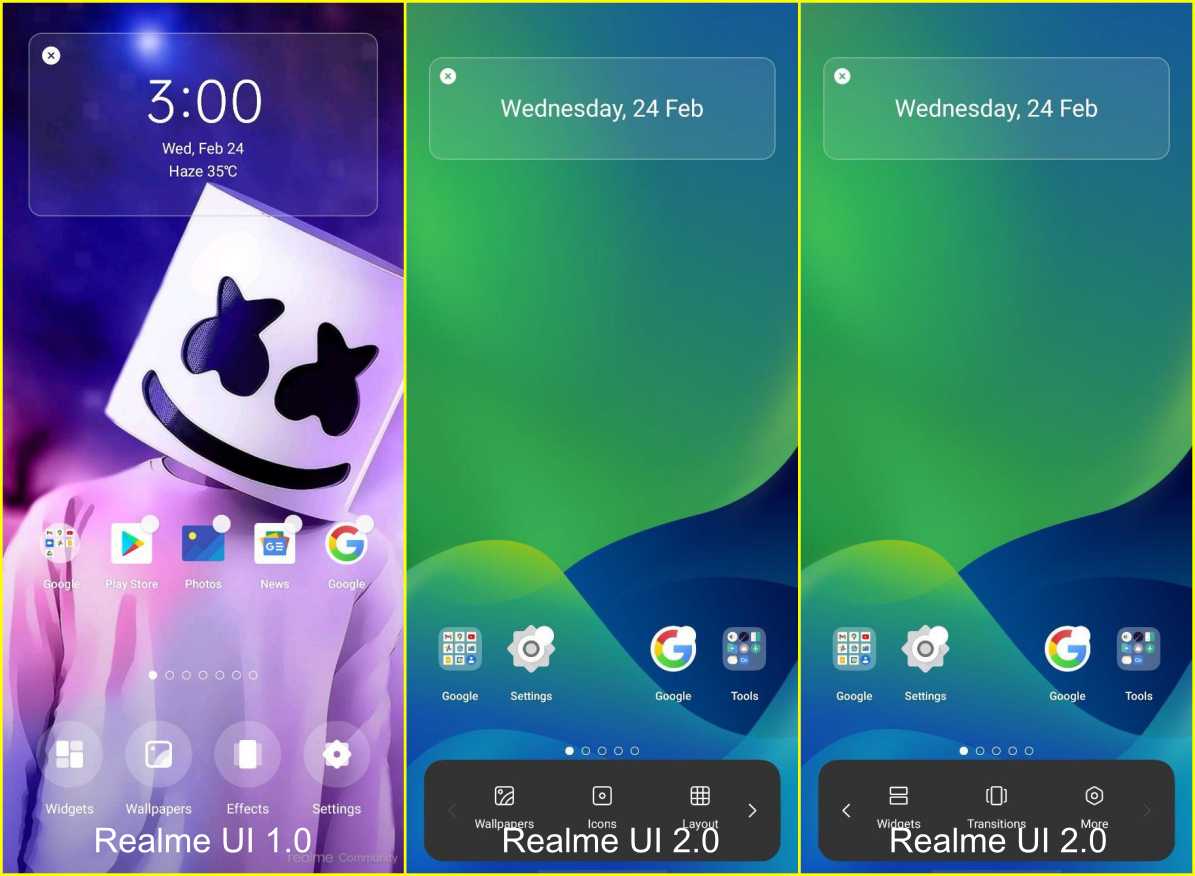 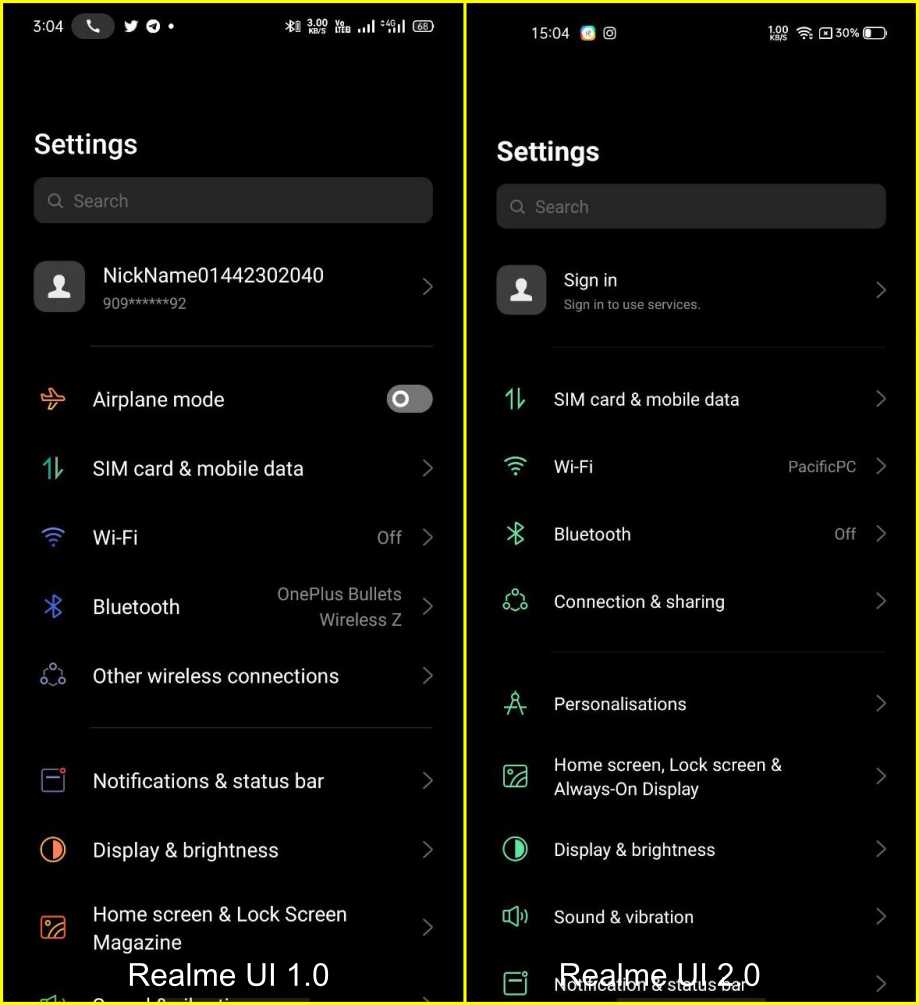 In its effort to declutter the interface, Realme has also streamlined many of the options and menus in the Settings app. You’ll immediately notice new icons for all categories and that the Airplane mode removed from the top. It is available under the connection & sharing option. 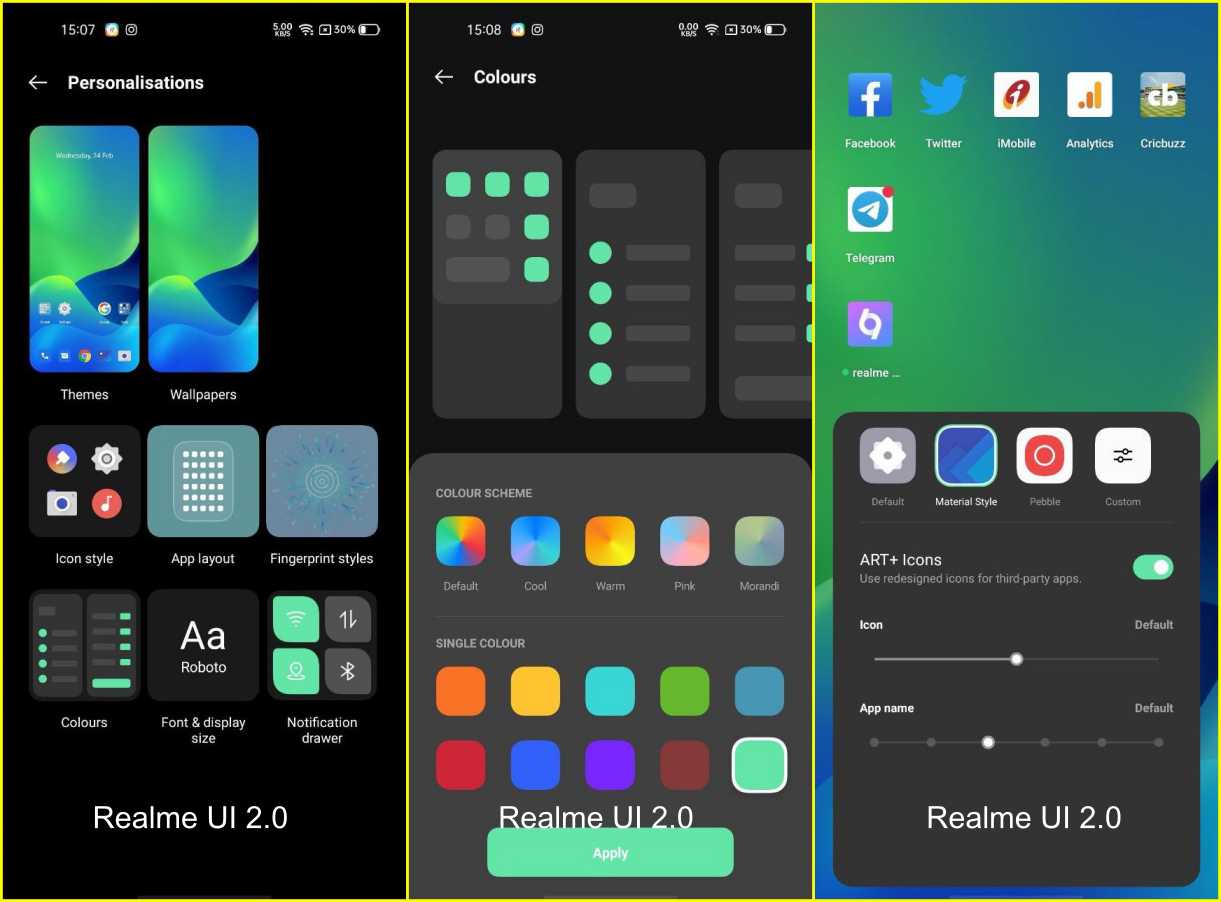 There are a new graphics personalize menu under the settings app. Now you can will many options in the menu, Themes, Wallpapers, Always on Display, Icon style, App Layout, Fingerprint style, colors, font & display size, Notification drawer. 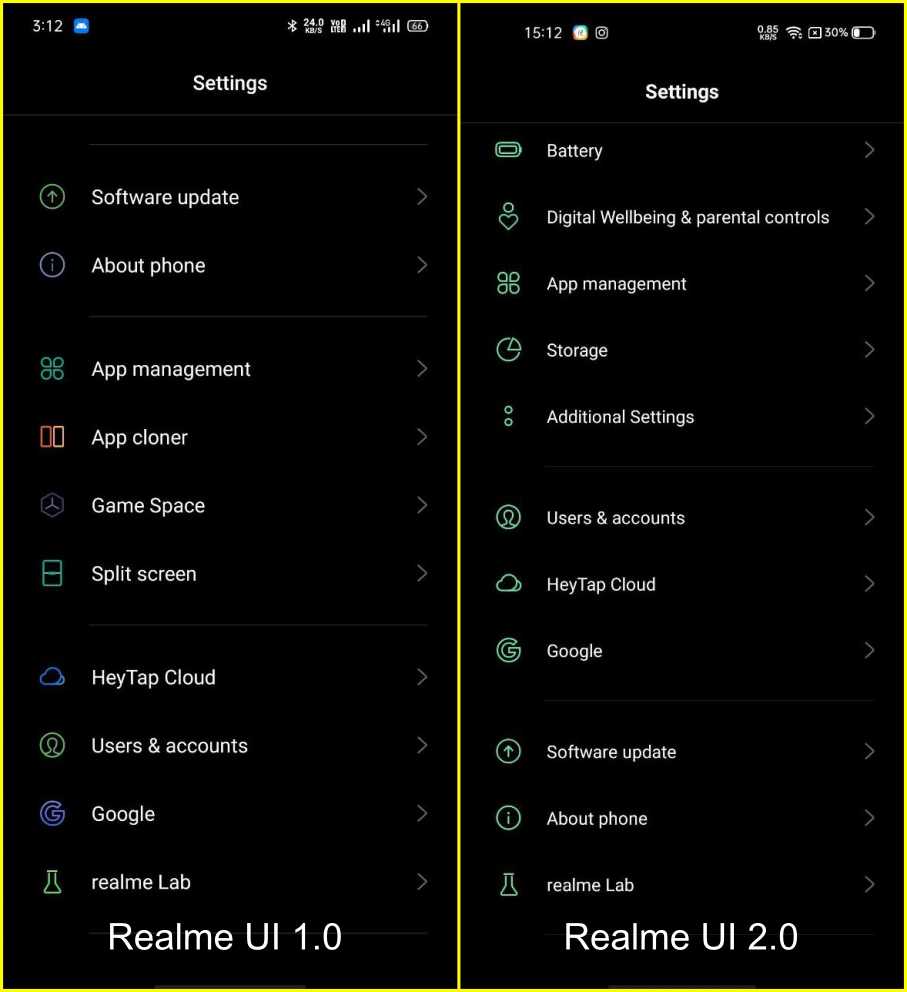 The Realme UI 2.0 brings 5 sections under the settings menu, and software updates, about the phone option available in the last section with Realme Lab. 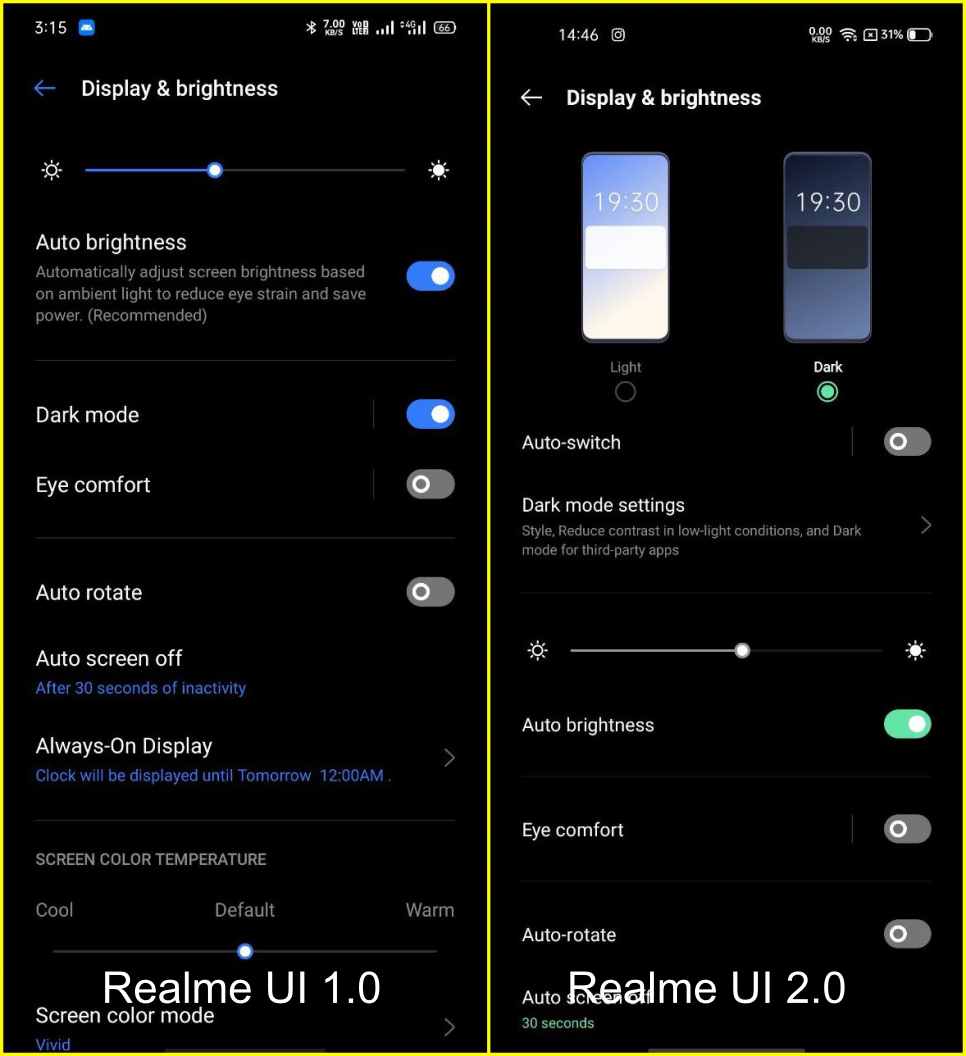 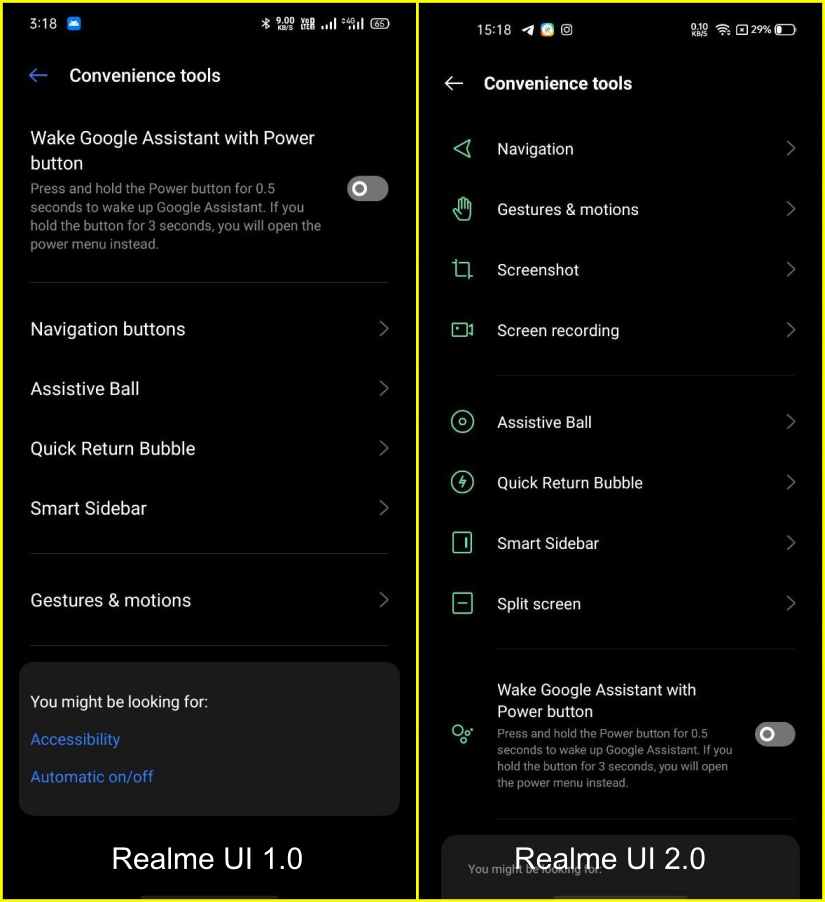 The company added some new options in the Convenience tools. You have to see the Screenshot, screen recording, split-screen. 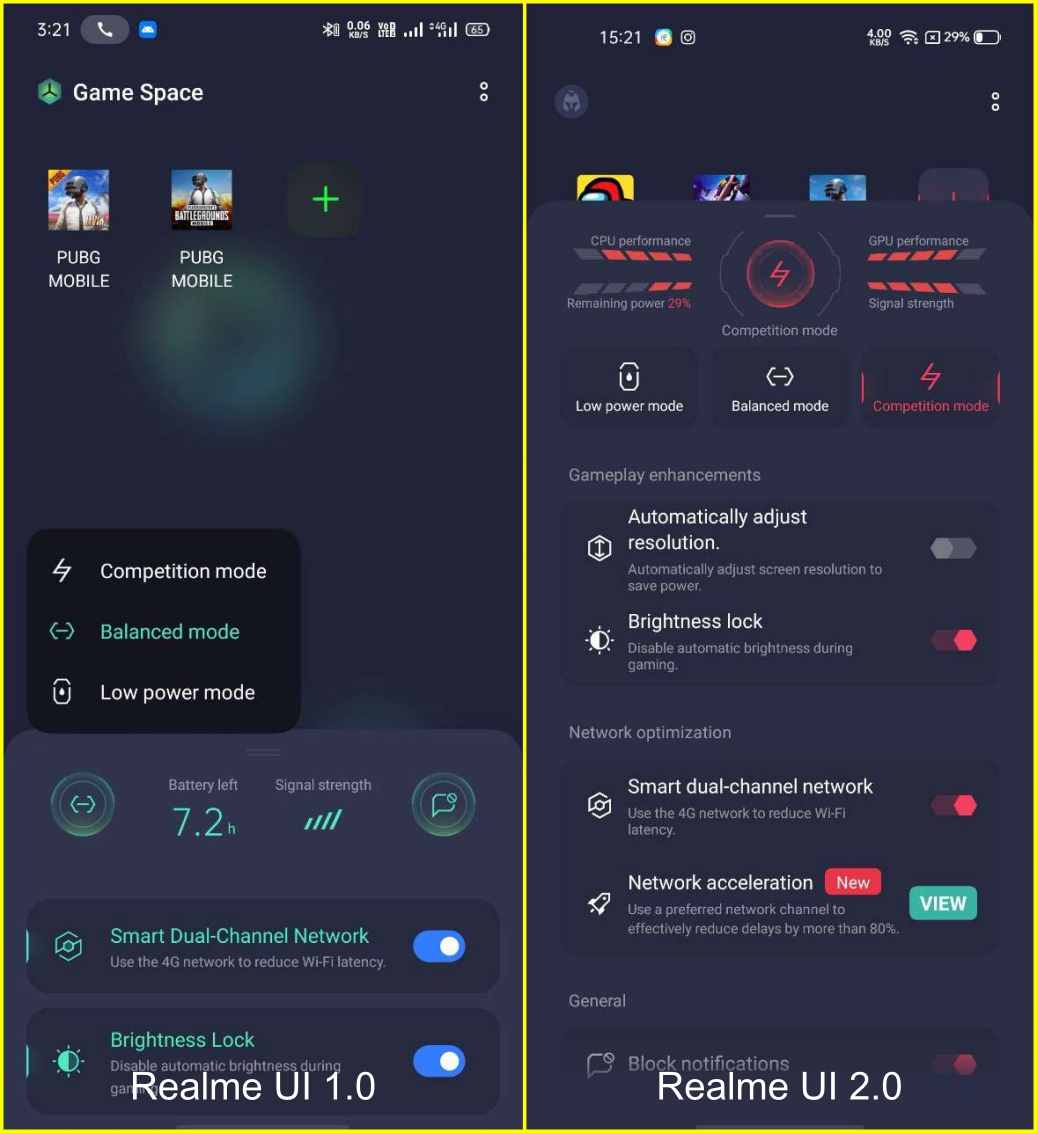 This is a major change of Realme UI 2.0, Game Space is the most important app for Gaming lovers, and the company’s new feature under the Game Space. It adds Automatically adjust the resolution, Smart dual-channel network, Network acceleration.

Find something else that’s new in the Realme UI 2.0 beta on your Realme smartphones? Share with us on Twitter and we’ll add it to the list.

:- Realme UI 2.0: How to use Sleep Capsule in Realme smartphones

:- How to Take a Screenshot on Realme Devices: Realme UI Tips and Tricks

:- Realme UI: How to use Game Space for better gaming performance