Realme users are waiting for AOD customization, but the is not available in Realme UI 1.0 as well as Realme UI 2.0. But according to a leak, Realme 7 Pro’s customization Always on Display is under development. But still, no concrete evidence confirms this. It’s just a leak

Last year September 2020, Realme unveiled two new Realme number series- Realme 7 and Realme 7 Pro in India. The latter has a higher configuration like the name. And today we are talking about Realme 7 Pro smartphone.

Whenever you look at a smartphone, the first thing you see is its display because it is a part of the beauty of the smartphone and if the display is SUPER AMOLED then the beauty makes double.

The AMOLED screen is very important in a smartphone if you are a camera lover likes to watch movies, or play games on mobile then this is a great option for you because it supports many features as compared to the LCD display.

If you have an AMOLED display on your mobile then Realme will provide you the following features- In-display fingerprint scanner, AOD (Always on Display), and Edge lighting, etc.

As compared to Realme X2, Realme 7 Pro doesn’t consist of the following features first under the Always-on Display (Clock customization and Mantra) and second is Edge lighting which provides notification light when the screen is off. Realme X2 also comes with an AMOLED Screen and supports these features after the Realme UI V1.0 update. It is surprising that Realme 7 Pro has a Super AMOLED display but still doesn’t have these options under the setting menu. 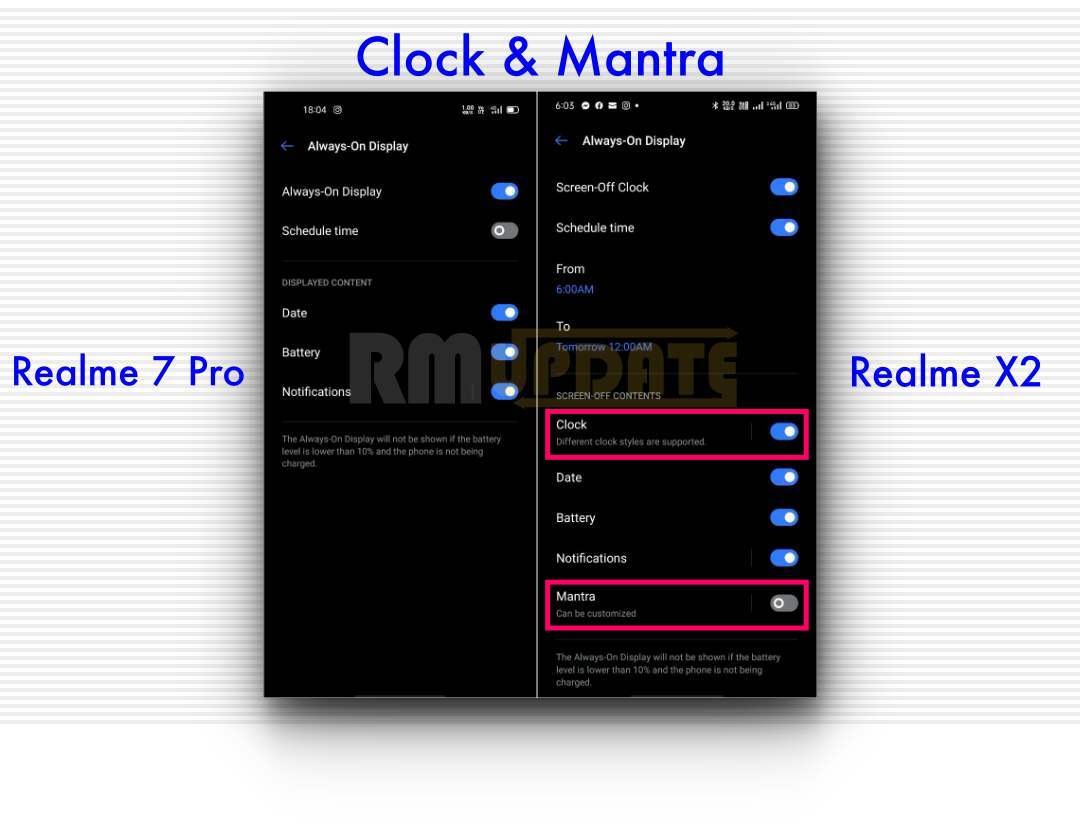 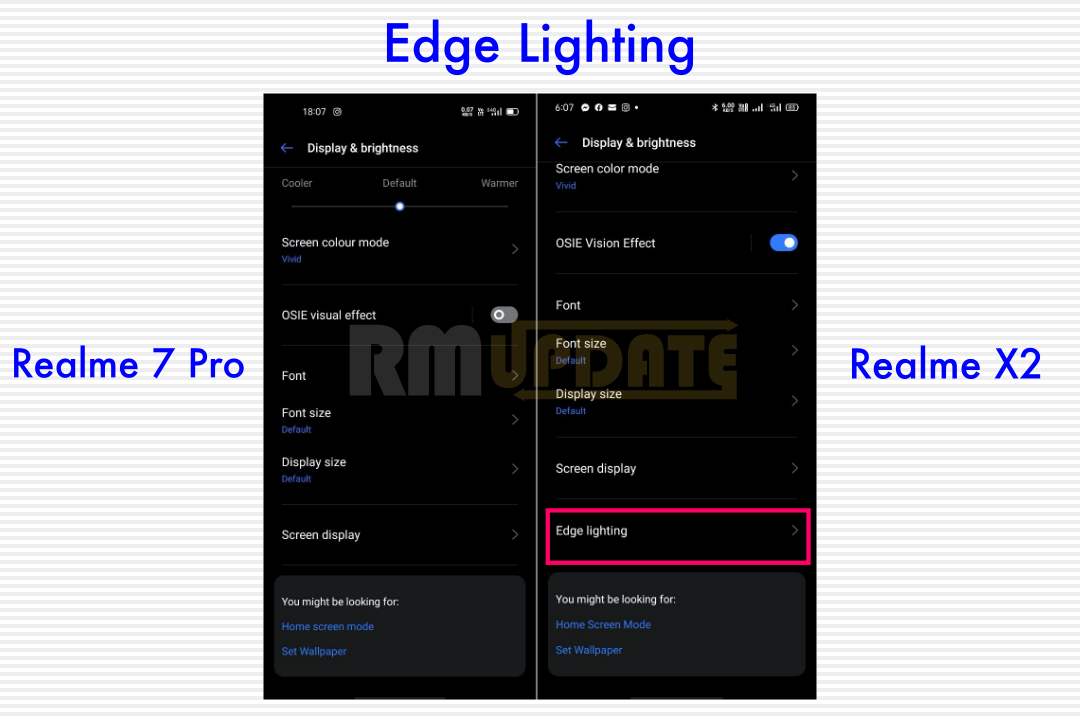 As we all know Realme has released the Android 11-based Realme UI 2.0 skin for several Realme smartphones. Recently, the company has started the beta program of this update, the latest skin brings new UI design, 3 style dark mode, new customizable Always-On Display, System Cloner, and more.

Both Realme X2 and Realme 7 Pro are running on Realme UI 2.0 Beta. But unfortunately, even after this update Realme 7 Pro does not have the features in which users can customize the Always-On Display option and add Edge Lighting for notifications. If seen, both devices have AMOLED display but these features are available in Realme X2 but not in Realme 7 Pro. 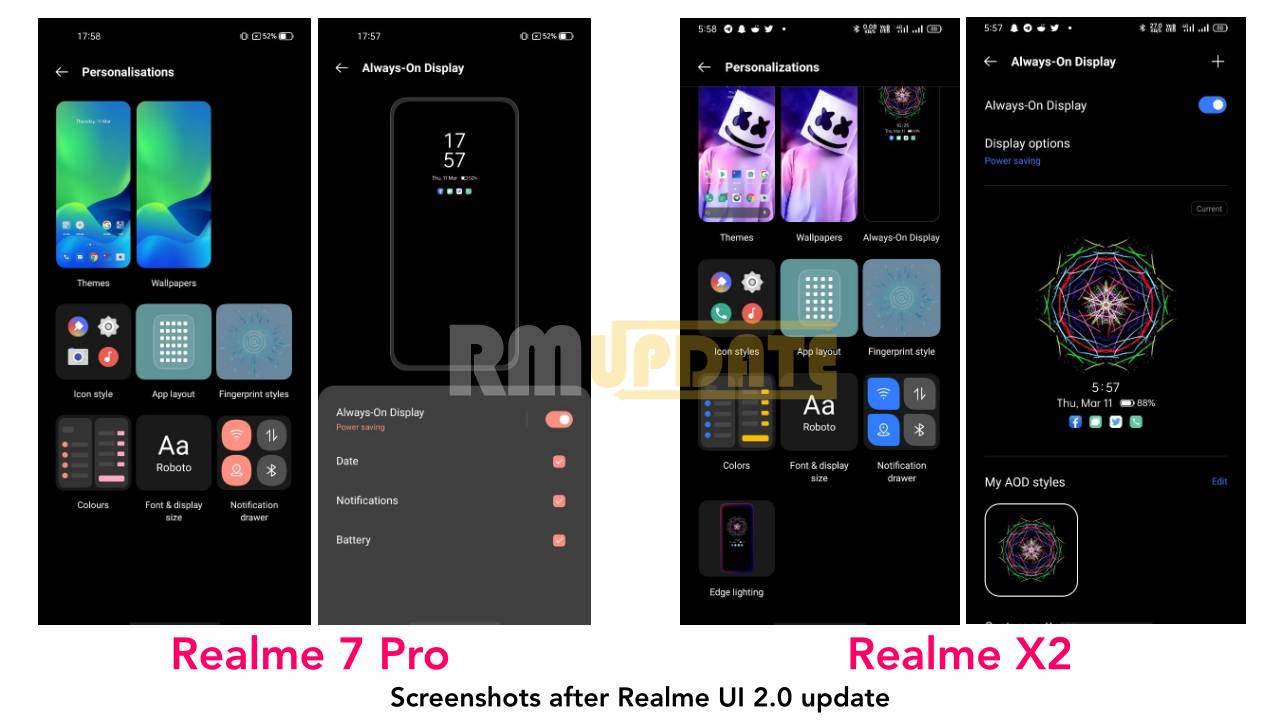 We are providing you the screenshot of Realme 7 Pro and Realme X2 in which you can see that option is missing. We hope that Realme will soon add these features via the OTA update.