Nothing launched its first smartphone with the Nothing Phone (1) in India in July 2022. This phone comes with a 50 MP dual camera, Nothing OS, Qualcomm Snapdragon 778+ processor, 120Hz OLED display, and an attractive design.

Last month, Google introduced the stable version of the Android 13, and some of the Android brands also rolled out their latest OS based on the Android 13. However, Nothing is still rolling out its firmware update based on Android 12.  Read more NothingOS 1.1.4 Update: Adds new features and September patch in Nothing Phone (1)

According to the information, the Android 13 beta update for Nothing Phone (1) is expected to launch later this year. Plus, the stable version of the Android 13-based Nothing OS could be released in 2023. However, the Chinese tech giant has not yet confirmed the specific release date or period of the Android 13 update.

On the other hand, the company has recently started rolling out a new software update for camera improvements alongside September 2022 Android security patch by the OTA update with version number Nothing OS 1.1.4, which is still based on the Android 12 operating system. Read more Nothing Ear (1) Stick Launch Imminent Spotted On Singapore’s IMDA Certification

The update optimized the 50 MP dual camera functionality and introduced a new Nothing-themed watermark to the camera app. Moreover, it increases the color consistency between main and ultra-wide sensors. 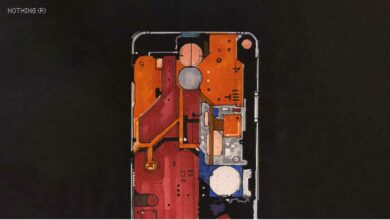 Nothing Phone (1): A Design That Will ‘Bring The Inside Out’ Nothing Phone (1) confirmed to launch without chin